What makes a great school district? Can a school district actually influence the success of its students? These are questions that parents, educators, and politicians have asked for years. Of course, gifted students can often overcome any challenges that are put in their way. However, is there anything school districts can do to push their students over the top when compared with other districts?

After taking a deep dive into the data and looking at school districts around the country, we have found some interesting trends that may suggest what factors play a role in making a school district one of the top districts in the country and what may leave some districts behind. While grades and test scores are important, there is more to a great school district than just the numbers on a report card.

Does Population Play a Role?

Does simply living in or near a big city mean that the school districts are automatically better? While that’s not necessarily true for all major cities, it does appear to be an advantage. It really boils down to dollars and cents. Areas with a larger population have a larger tax base to draw from and, in turn, have more money per student to dedicate to funding school districts. This is an important factor in our rankings and it also influences other factors that we consider for the rankings.

Simply put, districts with more money can buy better equipment and build better facilities. These districts can hire more teachers to keep the student to teacher ratio low, they can afford to hire experienced teachers that demand a higher salary.

Money isn’t everything but it sure is a good indicator about whether or not a school district will score highly. Having a large population is one thing but what is the state of that population? Wealthier cities not only have a large tax base to draw from but their tax base earns more income and, in turn, pays higher taxes. This means more money is available to help influence many of the important rankings we consider like funding per student, quality of teachers, and student to teacher ratio.

It should come as no surprise that cities appearing on the top 100 list like San Francisco, Fairfield, Santa Rosa, Honolulu, and New York also appear in the list of the wealthiest cities in America. Therefore, it should also come as no surprise that the poorest cities in America do not appear on the list of the top school districts in the country.

Of course, schools can’t do it all on their own. Home life can play a major role in a child’s success at school as well as later in life. Therefore, it would stand to reason that children raised in a home or city with a large number of college or university educated adults would be more driven to complete their schooling and move onto higher education.

Graduation rates play a major role in scoring school districts. After all, school districts can pour money into building fancy facilities, hiring the best staff, and keeping student to teacher ratios low but if they are not graduating a high number of students that all of the money has gone to waste.

There could be two reasons for this. First of all, kids with examples of educated individuals at home or in their community may see the benefits of completing high school right before their eyes. Individuals with college or university degrees are 117 times more likely to be multi-millionaires and college-educated individuals are expected to earn nearly a million dollars more than those who don’t attend college.

Secondly, kids raised in homes where adults may not have achieved higher education don’t necessarily have a worse home life. However, they may see their parents achieving good careers despite a lack of higher education or even completing high school. There may not be that push to follow in their parents’ footsteps and go to college or university. They may believe that a high quality of life can be achieved in spite of education level.

While the level of education in a community does not necessarily indicate students will graduate at a higher level, it would appear that cities with a lack of higher education degrees do not score as highly in our rankings. With graduation levels being an important part of that scoring process, it begs the question as to why some districts perform so well in this area while others do not.

The Rural vs Urban Divide

We mentioned earlier that highly populated cities tend to appear more frequently on the list than rural communities. While this may largely be due to the tax base size funding the school districts, could there be more at play?

According to census data, urban communities have a higher median household income than rural communities. Combine that with the population factor and it’s easy to see why urban school districts have more funding to affect many of the factors we consider for our rankings.

Could this be a snowball effect that has been building over time? Every year this divide could be growing for a number of reasons. Wealthy urban school districts will graduate more students who, in turn, will seek higher education at greater rates, earn more money, and fund more of their tax dollars into school systems for the next generation.

There is also the phenomenon of people moving from rural areas to urban areas. In fact, the 50 largest cities in the United States have all experienced population growth in recent years. Every single one of these large cities have grown as people move into cities for better job opportunities, a higher quality of life, and perhaps even better school districts for their children.

With these statistics in mind, it’s understandable why urban school districts appear to be outperforming rural districts. Furthermore, it would appear to suggest that the trend could continue which would only widen the gap between urban and rural school districts and increase the pace at which this gap continues to grow.

Do Politics Play a Role?

The question must be asked whether conservative vs liberal states plays any role in determining whether a school district will appear on the list of top districts. Some people may assume that a blue state may perhaps collect more taxes and, in turn, fund districts more generously to achieve higher scores and rankings. We looked at the most recent presidential election to compare the red and blue states to see if there is any sort of trend.

What Makes a Great School District?

What influences all of these factors? There’s no one single factor to point at but it largely boils down to money. Districts with more students and higher funding per student would theoretically be able to hire better teachers, hire more teachers, and positively influence test scores and graduation rates using those methods. This is not to say that poorly scoring school districts necessarily hire bad teachers or deliver poor test scores consistently across the board but there is a definite visible trend.

Population also appears to play a role. More people means more students and tax revenue to fund school districts which, again, can positively affect many of the factors we consider when scoring and ranking school districts.

Is there a way to bridge the gap between the districts in the top 100 and the districts that fail to make the grade? Without some kind of redistribution of funding from populated, wealthy areas to rural, poorer communities, it would appear that it may be harder for rural school districts to crack the top 100 list despite their best efforts.

However, while rural districts may not be able to achieve the level of funding that urban districts enjoy, they can influence some factors in spite of this. Keeping student to teacher ratios low could strongly affect scores in that area of our methodology and perhaps increase scores in other areas like test scores and graduation rates. It’s unlikely we will see rural districts take over the top of the list any time soon but there is nothing saying that these districts cannot make improvements and challenge for a spot in the top 100 despite the clear funding challenges they face.

After all, for all the money talk, a great school district is built on people. The students and teachers in the district are what ultimately determines if a district is successful or not. Dedicated teachers, hard-working students, and passionate administration are all things that money can’t buy. 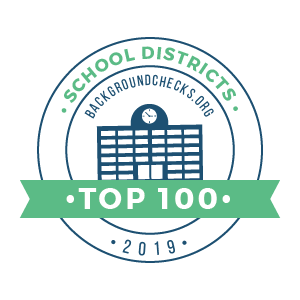