The Evergreen State is home to some of the most interesting and varied ecosystems in the United States: ice-capped mountain ranges, jagged, rocky coastline, temperate rainforests in the west and flat, arid basin in the east, as well as the largest and most unique city in the region, Seattle. Along with this interesting environment which grows and fosters creativity in the state’s youth, Washington is also home to numerous high performing public school districts serving the state’s children.

Washington’s best public school system is the Mercer Island School District, comprising six schools and one learning center located in the affluent suburb of Seattle that lends the district its name. Students of the district make good on excellent funding--with over $2 million dollars contributed by the school’s PTA--by maintaining a graduation rate of 95%.

At #3 is Snoqualmie Valley School District, one of the largest districts in the state covering over 400 square miles in King County, WA. Academic achievement in the district continues to improve, with Snoqualmie Valley becoming the only district in the state to be named on the AP Honor Roll for six straight years from 2010 through 2015. 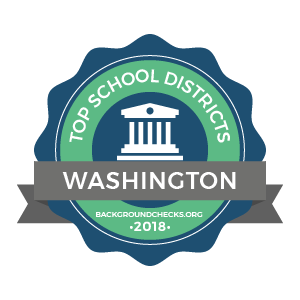