As the birthplace of eight U.S. presidents and carrying a long history of its sons and daughters leaving school to serve in the federal government, Virginia’s public school systems are held to a high standard of academic excellence. Luckily, the state boasts some of the finest public school divisions (the term used to denote subsections of schools in Virginia, rather than “school district”) in the country.

At #2 we have Arlington Public Schools, a large school division of over 30 schools and an enrollment topping 25K serving Arlington County, VA, which sits across the Potomac River from Washington, D.C. Students of this affluent county are known for their diversity, hailing from 122 nations and able to speak over 100 languages.

Fairfax County Public Schools, the largest school division in the country, boasting an enrollment of over 180,000, ranks #4. 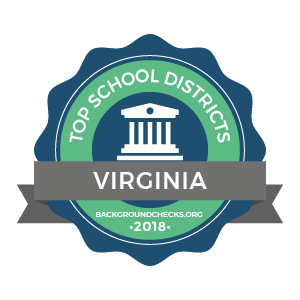