The Bayou State’s top school districts are spread out all across its confines, great school systems are located in the Baton Rouge area, the New Orleans metro area, and other regions further west. Owing to its old world influence, Louisiana is the only U.S. state whose political subdivisions are referred to as parishes, and many of its school districts are named after the parish in which they are based. As a whole, the state’s school districts have steadily improved in recent years.

Louisiana's highest ranked school district is Zachary Community School District, serving Zachary, LA, a city located 15 miles north of capital city Baton Rouge. Founded in 2003, ZCSD was named the #1 district in the state for a remarkable 11 years in a row through 2016, and continues to grow faster than any district in the state.

The #2 school district in the state is West Feliciana Parish Public Schools, based in St. Francisville, LA, and serving parts of other surrounding communities, as well. Unique for a public school district, West Feliciana requires all of its students to wear uniforms. The district’s schools regularly excel in both academics and athletics on the state level.

St. Tammamy Parish Public Schools places third among the state’s districts. In 2017, St. Tammamy once again maintained its “A” rating given by the Louisiana Department of Education.

Hit hard by Hurricane Katrina back in 2005, Plaquemines Parish School Board has overcome adversity to be named the state’s #4 best school district.

Rounding out the top five is Ascension Parish School Board, a large system of 27 schools based in Donaldsonville, LA,. 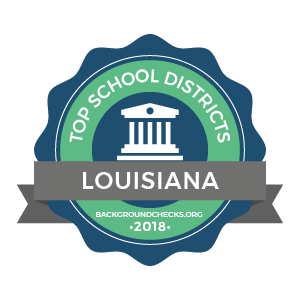