The Bluegrass State’s educational system has undergone a great deal of reform over the past 25 years, improving testing standards, curriculum, and access to resources in school districts across the state. Nowadays, Kentucky is home to many excellent public school districts.

The top school district in Kentucky is Fort Thomas Independent School District based in Fort Thomas, KY, though it is actually considered part of the Greater Cincinnati area. Fort Thomas Independent School District is exceptional; having been named a “District of Distinction” three times in a row, as well as achieving the honor of being the top-ranked district in Kentucky as assessed by the state government.

Beechwood Independent School District, headquartered in Fort Mitchell, KY, places second on the list. The district’s high school students achieved the highest ACT scores in the state, and both its elementary and high schools have received the Blue Ribbon award in recent years.

Third on the list is Oldham County Schools, a large system of 18 schools, and several specialty centers serving much of Oldham County. The district is one of the largest in the state and continues to grow, with enrollment doubling in the past few years.

Even larger is the fourth place district on the list, Boone County Schools, administering 21 schools with an enrollment of over 17,500 students. All of the schools in the district have been granted accreditation by AdvancEd due to academic excellence.

Campbell County Schools in Campbell County, also near the city of Cincinnati in neighboring Ohio, ranks fifth, overall. The district has received numerous accolades for its academic achievements, including a silver medal from U.S. News and World Report. 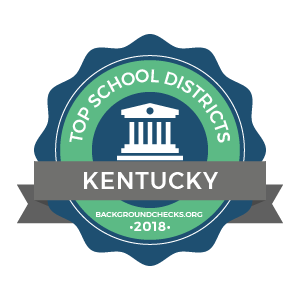