With over 39 million residents, California is the most populated U.S. state by a wide margin. Unsurprisingly, it also has the largest public school system in the country, with over 6 million students enrolled in more than 10,000 schools statewide. These schools employ over 260,000 teachers, 60,000 more than the entire population of the nation of Samoa.

Considering its booming economy and leading in the entertainment and technology industries, it’s no surprise that California boasts a huge number of excellent public school districts. SoCal-based school districts dominate the top 10, with Los Angeles County districts comprising four on the list, along with one in nearby Orange County. The top 10 is filled out by four bay area districts and one based in Joaquin Valley.

Top ranked Palo Alto Unified School District’s twelve primary schools, three middle schools and two high schools are all located nearby Stanford University, and no doubt benefit from their proximity to one ot the nation’s most prestigious universities. Palo Alto Senior High has been recognized for its academic excellence by Newsweek and other national publications.

Second-ranked Liberty Elementary School District in Tulare County consists of just one school, but it’s a good one. Just behind it is Hermosa Beach City School District (#3), made up of two elementary schools and one middle school that have received the National Blue Ribbon School Award for academic achievement.

California’s top five is rounded out by two great districts. Fourth place Piedmont Unified benefits from a generous amount of funding supplied by a parcel tax paid by the city’s residents, while San Marino Unified was ranked #1 Unified School District in the state by the State of California in 2017. 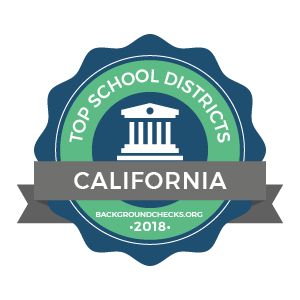