Many know Wyoming as a rugged, expansive natural playground, sparsely populated and home to a number of vast, beautiful state and national parks. Yet, few are aware that the Cowboy State is one of the best in the nation for education, with well-funded schools characterized by high performance in academics and standardized testing. Here’s a look at Wyoming’s five best school districts.

Albany County School District #1 is the best public school system in Wyoming. Comprising fifteen schools with an enrollment of over 4,000 in the southeastern part of the state, ACSD#1 boasts a math proficiency rate higher than state and national averages, and 105 students of the graduating class of 2018 received the Hathaway Scholarship.

Placing 3rd is Park County School District #16, a single-school district based in Meeteetse with an enrollment of 121. Students of the district graduate at a rate of 92.3% and over 70% are proficient in mathematics.

Natrona County School District earns Wyoming’s #4 spot. An expansive district based in the city of Caspar and serving around 13,000 students, NCSD is the largest employer in Natrona County and plays a central role in the lives of many of its residents.

Rounding out the list of Wyoming’s best school districts is Fremont County School District #2, consisting of a single K-12 school in the small town of Dubois. Despite its modest size, FCSD#2 offers an extensive, wide-ranging curriculum that gives students plenty of opportunity to specialize in their subjects of interest. 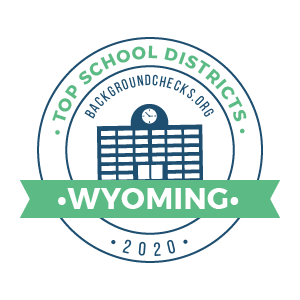