Although Texas is somewhere in the middle of the pack among U.S. states in terms of high school graduation rates and math and ELA proficiency scores, the state’s size means that there are well over one hundred high-performing public school districts where the graduation rate is above 90%. Here’s a look at the best of the best in the Lone Star State.

Texas’ best public school system is Highland Park Independent School District, a large district comprising four elementary schools, one intermediate school, one middle school, and one high school with a total enrollment of nearly 7,000. HPISD is one of the most prestigious school districts in the state, regularly logging average ACT and SAT scores well above state and national averages, and over 97% of its graduates go on to attend college.

Friendswood Independent School District earns Texas’ #2 spot. The district serves the rapidly-growing city of Friendswood and has a long list of accolades to its name, including a 98% graduation rate and a MET STANDARD rating from the Texas Education Association, the highest possible rating.

Placing 3rd is Barbers Hill Independent School District, which consists of seven campuses spread across four communities in West Chambers County. Every campus in the district has received an “A” rating from the state, which is the highest possible.

Lovejoy Independent School District earns the #4 spot in Texas. The district’s Lovejoy High School ranks in the top #1 of all high schools in the state in terms of academic performance, and excels in athletics, as well, laying claim to numerous state championships in volleyball, cross country, swimming, and more.

Filling out the list is of Texas’ best school systems is South Texas Independent School District, a magnet school district based in Mercedes and operating six schools. The district’s students demonstrate remarkably high levels of proficiency across all subjects and grade levels. 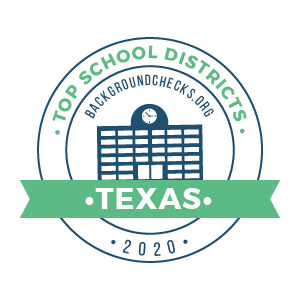