In good news for Tennessee educators, 2019 TNReady assessment test results showed that a majority of students in the state are improving in all mathematics subjects.  The Volunteer State still has a long way to go in order to be mentioned along with the states with the top public education systems, but a handful of Tennessee school districts are already performing at a high level that places them among the best, nationwide. Let’s take a look at Tennessee’s five best school systems.

Germantown Municipal School District is the best public school system in Tennessee. Comprising three elementary schools, one K-8 school, one middle school, and one high school in the affluent Memphis suburb of Germantown, GSD was established in just 2014 but has already positioned itself as the premier school district in the state, offering students access to high-end technology and facilities, a rigorous academic curriculum, and over 60 clubs and extracurricular activities.

Placing 2nd in Tennessee is Maryville City Schools, a district consisting of seven schools in the Knoxville metropolitan area city of Maryville.  MCS schools do a great job of preparing students for the future, as 85% of graduates go on to seek post-secondary education.

The 3rd best school district in Tennessee is Arlington Community Schools, made up of two elementary schools, one middle school, and one high school in the fast-growing town of Arlington. In recent years, ACS was one of just 12 districts in the state to be named an “Exemplary School District” by the Tennessee Department of Education.

Kingsport City Schools earns the 4th spot in Tennessee. The large district consists of eleven schools in the city of Kingsport and its graduation rate of 95.9% is over six points higher than the Tennessee state average. 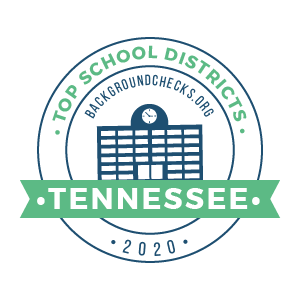