Like other states in the New England region, Rhode Island has a long tradition of excellent public education. Although the state’s test scores don’t quite match those of Massachusetts, they are still better than those of most states. What’s more, performance in Rhode Island’s best school districts is on par with the best districts in the country. Here’s a rundown of the Ocean State’s top five school districts.

Barrington Public Schools is the best school system in the state of Rhode Island. A medium-sized district comprising four elementary schools, one middle school, and one high school with a total enrollment of 3,350, BPS has a long list of accolades and achievements. Half of the district’s schools have been named Blue Ribbon Schools of Excellence, while five out of six were named Commended Schools by the Rhode Island Department of Education (RIDE).

Placing 2nd in Rhode Island is East Greenwich School Department, which consists of six schools in the wealthy town of East Greenwich. The top-rated school district logged a 95% graduation rate in 2019.

Rhode Island’s 3rd best school district is South Kingstown School District,  which is headquartered in Wakefield and made up of seven schools with a total enrollment of around 2,900.  Every school in the district earned three or four stars on the 2018-2019 RIDE Report Card.

We travel across the county for 4th-ranked North Kingstown School Department, which comprises five elementary schools, two middle schools, and one high school in the town of North Kingston. North Kingston is a much-lauded school district that is only getting better, having been recently recognized by the RIDE for its substantial gains on the New England Common Assessment Program.

Rounding out the list of Rhode Island’s five best school districts is the Cumberland School Department, made up of eight schools in the Providence County town of Cumberland. The district’s high school graduation rate is about five points higher than the state average. 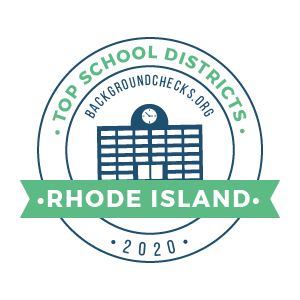