It may come as a surprise to some that Oregon’s education system has a poor reputation, yet the state regularly posts low graduation rates and poor average reading and math proficiency scores.

However, things are improving: the Oregon graduation rate hit 80% in 2019 for the first time in a decade. Of course, the state’s five best school districts manage graduation rates well above the state average, let’s take a look at these high-performing districts.

Lake Oswego School District is the top school system in Oregon. The large district consists of six elementary schools, two middle schools, and two high schools with an enrollment of around 7,000. LOSD’s 93.1% graduation rate is well above the state average, and remarkable for a district its size.

Earning Oregon’s #2 spot is Sherwood School District, comprising seven schools with an enrollment of 5,136 students in Washington County.  Over 70% of the district’s students meet or exceed expectations in mathematics and English language arts.

Corvallis School District is the 3rd best school district in Oregon. The district is made up 13 schools and is one of the most ethnically diverse in the state, with students representing over 77 birth countries.

Placing 4th is McMinnville School District, which comprises six elementary schools, two middle schools, and one high school with a total enrollment of around 6,800 and is the largest district in Yamhill County. Students of MSD graduation at a rate eight points higher than the state average.

Ashland School District completes the ranking of the best school districts in Oregon. The district’s Ashland High School is regularly considered one of the best high schools in the state. 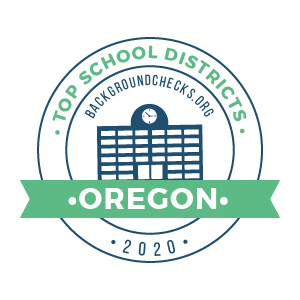