The five best school districts in Oklahoma have two things in common: they are all located in the northeastern portion of the state (with most serving Oklahoma City or Tulsa suburbs), and they all have enrollments of over 4,000 students. Let’s take a look at these five high-performing school systems.

Deer Creek School District is the best school system in Oklahoma. Comprising nine school buildings serving an enrollment of over 6900, DCSD boasts a graduation rate of 96%, which is over 13 points higher than the state average.

Placing 2nd is Public Bixby Schools, which consists of nine schools in the Bixby area. The district’s high school is one of the best in the state, earning a 92% graduation rate in 2019 as well as the 2nd highest average composite ACT score in the region.

Oklahoma’s 3rd best school district is Stillwater Public Schools, made up of six elementary schools and four secondary schools in the city of Stillwater. Eight of the district’s nine schools earned a “B” or “A” on the 2018-2019 Oklahoma School Report Cards.

Piedmont Public Schools earns the 4th spot in the ranking. The district serves the 2nd fastest growing community in the state, and district enrollment has increased 33% since 2014. Nevertheless, expansion has not affected the district’s quality, and it and it remains one of the best rated in the state.

Rounding out the list is Bartlesville Public Schools, consisting of six elementary schools, two middle schools, and a high school with an enrollment of around 6,000. Of the top five Oklahoma school districts, BPS has the lowest best student-teacher ratio, with 16.9. 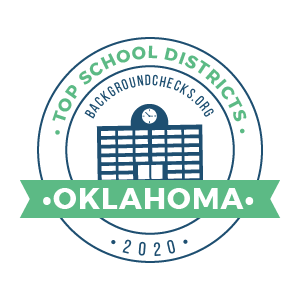