Many believe Ohio’s education system is stagnant: the state has earned a “C” grade in the annual Quality Counts report card for a number of consecutive years. However, despite the state’s mediocre overall grade, over 100 Ohio school districts logged graduation rates of over 90% in the most recent year, and those at the top are some of the best in the nation. Here’s more information about the five best school districts in Ohio.

Jackson Local School District is the best public school system in Ohio. The district serves an enrollment of 5,800 and has earned a rating of “Excellent” from the Ohio Department of Education for 16 straight years. What’s more, two of its schools have been recognized as Blue Ribbon Schools.

#2 New Albany-Plain Local Schools is nearly as accomplished: the 5,000 student-strong district is one of just 31 Ohio school districts to earn an “A” grade from the Department of Education and over 60% of its students earned a score of 3 or higher on the AP Exam.

The 3rd best school district in Ohio is Milford Exempted Village School District, which consists of one preschool, six elementary schools, one junior high, and one high school. Two of the district’s schools have received Nation Blue Ribbon honors, and its high school’s college readiness ranking is regularly the highest in Clermont County.

Earning the 4th spot in Ohio is Brecksville Broadview Heights City School District, comprising five schools serving the city of Brecksville and parts of surrounding communities. The district has earned many academic accolades and is home to the Bee Gymnastics team which has taken home sixteen straight state championships.

Filling out the top five is Forest Hills School District, which has nine schools serving an enrollment of 7,400 students. Forest Hills students are well-rounded and highly active: 80% of middle and high school students are involved in extracurricular activities or athletics. 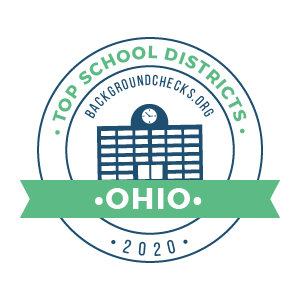