Educators in North Carolina recently received the disappointing news that the Read To Achieve program, which was launched in 2012 aimed at getting more young children to read, had not yielded positive results. In fact, proficiency scores were worse in 2019 than in 2011 before the program had begun.

Mooresville Graded School District is the best school district in North Carolina. The district encompasses three elementary schools, two intermediate schools, one middle school, and one high school with a total enrollment of 6,100. MGSD is one of the best districts in the state for academics, ranking in the top ten in ten North Carolina School Report Card subject areas, and its athletics program is first-class, as well.

Earning the #2 spot in North Carolina is Orange County Schools, a district headquartered in Hillsborough and consisting of 13 schools. The ethnically-diverse school district boasts a graduation rate well above the state and national averages.

The 4th best school district in North Carolina is Dare County Schools, comprising 11 schools with a total enrollment near 5,000. With all schools meeting or exceeding growth each year and the district managing a 95% graduation rate, DCS outperforms state standards in every metric.

Rounding out North Carolina’s top five school districts is Watauga County Schools, which is headquartered in Boone and consists of nine schools. WCS is a state leader in innovation, with its high school being the first in the state to offer a 1:1 laptop program to its students. 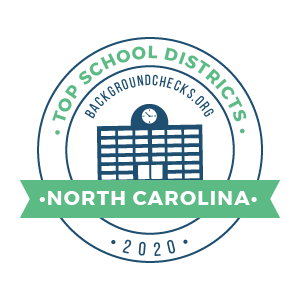