The best school district in Nebraska is Gretna Public Schools, comprising five elementary schools, two middle schools, and one high school in the city of Gretna. The district has long been one of the best in the state, regularly earning high test scores and graduation rates above 95%. What’s more, Gretna High School has been named a National Blue Ribbon School for its academic excellence.

Placing 2nd in the state of Nebraska is Westside Community Schools, the 3rd largest school in the state consisting of 12 schools in the city of Omaha. Schools in the district have earned many honors, including a recent Blue Ribbon School award for Paddock Road Elementary School.

Seward Public Schools earns the 4th spot. The modestly-sized district is made up of one elementary school, one middle school, and one high school.  SPS has received an “Excellent” rating by the Nebraska Department of Education for two straight years, and is one of just two districts in its class to do so.

Filling out the list of Nebraska’s best school systems is Norris School District, which administers four schools serving an enrollment of around 2,400. The district is accredited by the Nebraska State Department of Education. 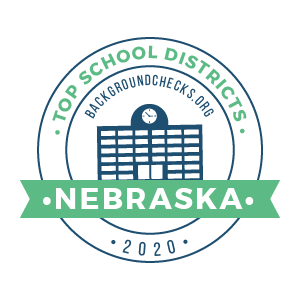