Montana is in the running for the title of the most geographically dazzling state, with its towering peaks, thousands of snaking rivers, and diverse wildlife. However, the state is merely average in terms of public education, with math and reading proficiency rates around the 50% mark.

Bozeman High School District is the best public school system in Montana. Consisting of Bozeman High School and school-within-a-school Bridger Charter Academy, the district has an above-average graduation rate and 71% of its students are college or career ready.

Earning the 2nd spot in the ranking is Billings High School District, which comprises three high schools in the state’s largest city. The district places a focus on STEM education and its schools have flourishing athletics programs.

Beaverhead County High School District places 3rd in the rankings. Consisting of a single high school in the small town of Dillon, Beaverhead students graduate at a rate over ten percentage points higher than the statewide rate.

Montana’s 4th best school district is Missoula High School District, made up of four high schools in Missoula and Seeley Lake. The district’s students benefit from a favorable student-teacher ratio of 15.2.

Rounding out Montana’s top five is Park High School District, comprising a single high school in the town of Livingston, which lies just north of Yellowstone National Park. Students of Park High School are 60% proficient in reading & language arts, which is significantly higher than the statewide rate. 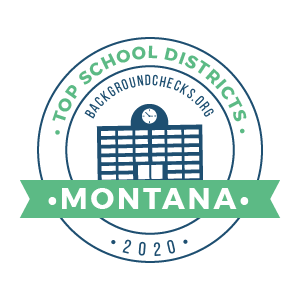