Compared to other states, Missouri is in the middle of the pack in terms of public education quality, earning a “C” grade in the 2019 Quality Counts report card. However, you wouldn’t know it by looking at the state’s five best school districts, all of which maintain a consistently high level of performance.

Missouri’s best school system is Kirkwood School District, which comprises five elementary schools, two middle schools, and a high school serving an enrollment of 5,700 students. Students of the district regularly earn test scores that are among the highest in the state while graduating at a rate of 99%.

Lindbergh Schools earns the #2 spot in the ranking of Missouri’s best school districts. Lindbergh is a large district, with over 7,100 students attending one of eleven different campuses. The district’s schools have received a generous number of awards and achievements, including six National Ribbon School honors.

Placing 3rd in the ranking is Ladue School District, comprising seven schools and an early childhood center in the city of St. Louis. The ethnically diverse district regularly manages a graduation rate of over 90%.

The School District of Clayton places 4th in the list of Missouri’s best school districts. Headquartered in Clayton, the district comprises six schools with an enrollment of around 2,800. A remarkable 21 Clayton High School students were named National Merit Scholars in 2020.

Rounding out the list is Ozark School District, comprising seven schools in the city of Ozark. Students of the district consistently perform at a high academic level, which is seen in the 97.2% graduation rate, 22.6 average ACT score, and 53% of students that qualified for an A+ scholarship. 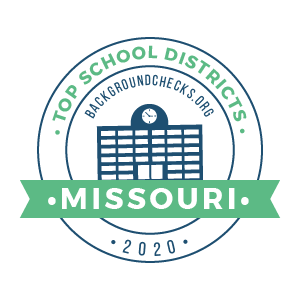