In many areas, Mississippi lags behind other states, and education is one of them. However, despite the state’s issues, there are a handful of public school districts in the Magnolia State that stack up nicely against the best in the nation. Here’s a look at Mississippi’s five best school districts.

Ocean Springs School District is the best public school system in Mississippi. Consisting of six schools and an alternative education center in the coastal city of Ocean Springs, OCCD has a stellar track record: each of its schools has an “A” rating from the Mississippi Department of Education. The district’s students aren’t too shabby, either, with the Class of 2019 bringing in over $19 million in scholarship money.

Earning the #2 spot in the ranking is Clinton Public School District, comprising four elementary schools, one junior high, one ninth-grade school, and a high school in the city of Clinton in the Jackson metropolitan area. The district boasts an 86% graduation rate and 63% of its students are proficient in math.

Mississippi's 3rd best school system is Oxford School District, a medium-sized district of six schools with a total enrollment of around 4,300.  OSD students earned Mississippi Academic Assessment Program scores which are among the highest-ranking in the state.

Placing 4th is Biloxi Public School District, an “A” rated district serving students of the coastal city of Biloxi. BPSD schools have received a number of national and state awards honoring their excellent performance, including a National Blue Ribbon award for Biloxi High.

Tupelo Public School District rounds out the list of Mississippi’s best school districts. The large district of fourteen schools serves an enrollment of nearly 7,000 students while maintaining a high standard of academic performance. TPSD’s graduation rate of 88% is above state and national averages, and over 50% of the district’s students are on the Honor Roll. 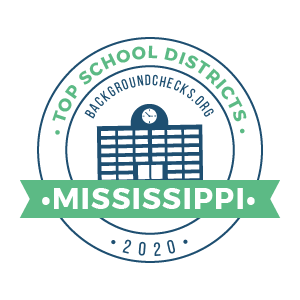