While there is a lot of progress to be made in Michigan’s public school system, with its standing among other Midwest states dropping in the past couple decades, it’s not all bad: there are plenty of school districts in the Great Lakes State where things are going well. Let’s take a closer look at Michigan’s top five school districts.

Ranking #1 among Michigan public school districts is the Copper County Intermediate School District, which administers 13 smaller school districts with a total enrollment of around 6,600 students.

The Eaton Regional Education Service Agency is Michigan’s #2 public school district. Another conglomerate school district, Eaton RESA’s six component school districts are some of the best in the state in terms of composite test scores.

The following contributed to the ranking: number of students (K-12), graduation rate, teacher quality, school funding, student to teacher ratio, standardized test results (reading and math; the percentage of students scoring at or above state proficiency level). Data from a total of 10,728 school districts had sufficient values for the variables above. 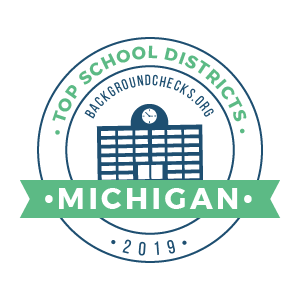