Lexington Public Schools is the best school district in Massachusetts. Comprising eleven schools in the town of Lexington, the district outperforms state and national averages in every possible metric, and examples include 87.3% of district students completing at least one advanced course (compared to just 65.1% in the state) while also managing a 100% completion rate of the MassCore program of studies.

Placing second in Massachusetts is Needham Public Schools, consisting of eight schools in the Boston suburb of Needham. Needham students regularly perform well on assessment tests, earning average scores in the state top 10 in both English and language arts and science and technology in 2018.

Massachusetts 3rd best public school district is Wellesley Public Schools, comprising seven elementary schools, one middle school, and one high school with a total enrollment of 4,758 in the Norfolk County town of Wellesley. In 2018, WPS’s graduation rate was above 97%, and nearly 93% of graduates went on to attend a 2 or 4-year university.

Earning the 4th spot is Winchester Public Schools, a high performing district of eight schools in the wealthy suburb of Winchester. Students in the district regularly score well above the state average on the SAT. 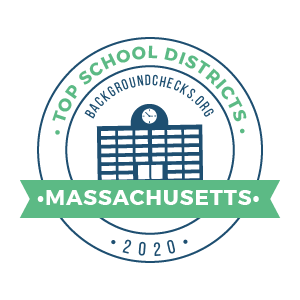