Maryland is among the top states in terms of K-12 academics, with well-funded school districts and above-average proficiency rates in math and reading. In 2019, Education Week magazine gave the state a B grade, which bests the national grade of C, and ranked Maryland 4th in the nation in education. Let’s take a closer look at the five best school districts in Maryland.

The best school district in Maryland is Montgomery County Public Schools, which is the largest school system in Maryland comprising 206 schools with a total enrollment of over 163,000. MCPS is home to a remarkable 41 National Blue Ribbon Schools.

Placing 2nd is Prince George’s County Public Schools, another vast district made up of over 200 schools serving more than 130,000 students. Despite the district’s size, PGCPS schools are well-funded, and have earned national recognition for their innovative learning programs and focus on career and technical education.

Baltimore County Public Schools is the 3rd best school district in Maryland. Like the first two entries, BCPS is a large school district that is home to many schools that have received national attention for their high academic performance. In total, over 20 BCPS schools have won a National Blue Ribbon Award.

Earning the #4 spot is Howard County Public Schools, consisting of 77 schools with a diverse student population of nearly 59,000. The district’s 4-year graduation rate of 92% is nearly five percentage points higher than the state average. 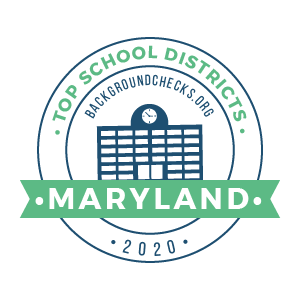