Like other states in the New England region, Maine has a long tradition of excellence in public schooling. In particular, Maine spends more money per pupil and has a smaller average class size than the United States, at large, which has yielded positive results. Nowhere is Maine’s high standard of education more evident than in its five best school districts.

Falmouth Public Schools is a small, high-performing school district of three schools in the coastal town of Falmouth. The district’s students benefit from a favorable student-to-teacher ratio of 11.5, which may explain why over 70% of students are proficient in math and RLA.

Maine’s 2nd best school district is the Yarmouth School Department, a modestly sized district made up of one kindergarten, elementary school, middle school, and high school in the Portland suburb of Yarmouth. In 2019, Yarmouth High School was named a National Blue Ribbon School of Excellence.

Coming in 3rd is MSAD #51, another small district of four schools headquartered in the affluent town of Cumberland. Students of the district excel in all areas, consistently scoring above state averages in assessment tests, and graduating at a rate of over 95%.

Cape Elizabeth School Department is the 4th best school system in the state of Maine. Like other exceptional school districts in the state, CESD is small, consisting of three schools with a total enrollment of around 1600. The district’s Cape Elizabeth High School has been named a Blue Ribbon School twice in the past fifteen years.

Rounding out Maine’s top five is Scarborough Schools, another three-school district based in the coastal resort town of Scarborough. Students of the district excel in academics, participate enthusiastically in academics and extracurriculars, and pursue post-secondary graduation at a rate of 90%. 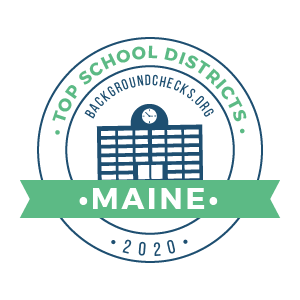