The best school district in Kentucky is Fort Thomas Independent Schools, which consists of three elementary schools, one middle school, and one high school in the city of Fort Thomas, near the state’s northern border. Fort Thomas is one of the best school districts in the nation: it boasts a 99% graduation rate, and four of its schools have been named Blue Ribbon Schools by the U.S. Department of Education.

Kentucky’s #2 top school district is McCracken County Public Schools, encompassing eleven schools serving an enrollment of almost 7,000 students. The district’s McCracken County High School is one of the best in the area for preparing students for the future, offering 26 AP courses and 13 career certifications. Students can leave the school with two years of college credits in tow.

Placing 3rd is Henderson County Schools, which is a large district of thirteen schools with a total enrollment topping 7,400. Students of HCS are in good hands, as 79% of the district’s teachers have a Master’s Degree or higher.

Meade County Schools earns the 4th spot in the ranking of Kentucky’s best school districts.  MCS is headquartered in Brandenburg and consists of six elementary schools, one middle school, and one high school. Students of the district excel academically, earning high rates of proficiency in reading and mathematics.

Floyd County Schools rounds out the list of Kentucky’s five best school districts. The district comprises eleven schools with a total enrollment of around 6,000. FCS boasts AdvancED accreditation and won the District of Distinction honor three years in a row. 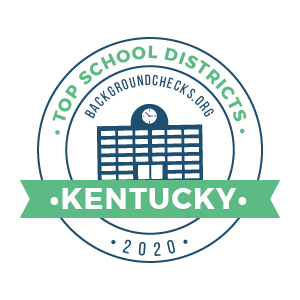