Kansas is quietly one of the best states in the nation in terms of K-12 education, achieving high outcomes while spending less money per pupil than other high-ranking states. This standard of excellence is reflected in the state’s five best school districts, as each one excels academically, and has earned its share of merits.

The best school district in Kansas is Unified School District 232, which comprises 12 schools serving over 7,400 students hailing from several communities in Johnston County. USD 232 boasts a high record of achievement in both academics and co-curricular activities and has been recognized with numerous awards over the years.

Maize Unified School District 266 is Kansas’ #2 public school system. The district’s 15-year-long strategic plan known as “Journey to Excellence” has been a great success, resulting in high levels of math and language arts proficiency and a 99% graduation rate in 2018.

Gardner Edgerton School District 231 earns the 4th spot in the ranking of Kansas’ best school districts. A medium-sized district of 11 schools with an enrollment of around 6,100, USD 231 boasts high-end facilities and is home to three schools that have earned National Blue Ribbon honors.

Auburn-Washburn Unified School District 437 rounds out the ranking of Kansas’ top five public school districts. Serving an enrollment of 6,400 students, USD 437 balances its stellar academics with a wide variety of co-curricular activities available for students to participate in. 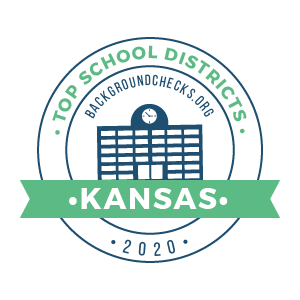