The best school district in Illinois is Lincoln-Way Community High School District 210, which comprises three high schools in the communities of New Lenox and Frankfort. Lincoln-Way is an excellent district that continues to improve, hitting its highest graduation rate in history in the most recent school year (98%). Furthermore, 85% of district students went on to a 2 or 4-year college within 16 months of graduation.

Not far behind is Community High School District 155 (#2), which encompasses 4 high schools serving several communities in McHenry County. The district boasts a graduation rate of 95%, which is ten points higher than the state average, and 2019 graduates were awarded $11.7 million in scholarship money.

Placing 3rd in Illinois is Hinsdale Township High School District 86, which operates two schools serving the communities of Hinsdale and Darien. Like the first two districts in the ranking, D86 has a very high graduation rate, and a remarkable 98% of graduates go on to attend the higher learning institution of their choosing.

Consolidated High School District 230, which serves several southwest suburbs of Chicago in Cook County, earns the #4 spot on the list. CHSD230 is another high-performing high school district, boasting a graduation rate in the 90’s, a 91% college persistence rate, and 72% participation in co-curricular activities. 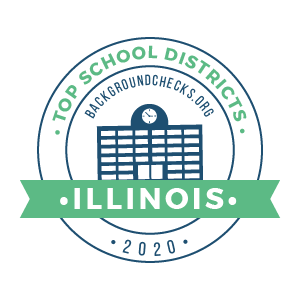