For several years straight, Idaho has been the fastest-growing state in the country. The influx of new residents into the state poses a concern for many of Idaho’s public school districts, forcing them to rezone district boundaries or open new schools. However, having to manage new students has not affected the quality of Idaho’s five best school districts, which continue to perform at a high level.

Post Falls School District is the best public school system in Idaho. Comprising ten schools (with a new elementary school set to open in Fall 2020) in and around Post Falls, a city near the state’s border with Washington, PFSD boasts a 95% graduation rate and has earned six state championships within the last five years.

Placing 2nd in Idaho is Jefferson Joint School District, a medium-sized district of six elementary schools, one middle school, and two high schools headquartered in the city of Rigby. The expanding district maintains an above-average graduation rate and offers Spanish and Chinese immersion programs to its students.

Idaho’s 3rd best school district is Madison School District, which is headquartered in Rexburg and comprises ten schools and an online academy. Students of the district have the highest ISAT scores in South Eastern Idaho, and Madison High School is one of only two Idaho schools to be named to the National AP Honor Roll.

#4 Blaine County School District is made up of 8 schools serving an enrollment of around 3,400 students. The district’s diverse student body consistently performs above the state average on the ISAT and STAR tests.

The 5th best school district in Idaho is Lakeland Joint School District, which consists of six elementary schools, two junior highs, and three high schools. Like many districts in Idaho, LJSD is growing at a fast rate, yet it has successfully maintained its high academic performance and focus on extracurricular activities. 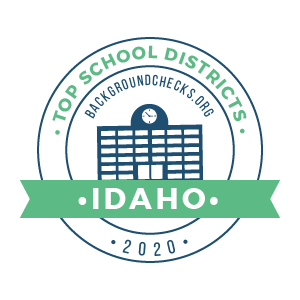