Like other states in the Southeast, Georgia’s public schools lag slightly behind compared to those in other regions of the country. However, public education in the state is steadily improving, with the state graduation rate regularly hitting all-time peaks, year after year. While this is good news for Georgia, the performance of the state’s best districts far puts them in an elite class of their own.

Buford City Schools is the best school district in Georgia. Comprising four schools in Gwinnett County, BCS has long been considered one of the highest performing districts in the state, both in academics and extracurriculars. Four Buford schools hold an “A” grade from the Governor’s Office of Student Achievement.

Ranking 2nd is the City Schools of Decatur, a public charter school district of 10 schools in Dekalb County with a total enrollment of around 5,600 students. On standardized tests, students of the district outperform state and national averages in all grade levels, while Decatur High School was named a Georgia AP Challenge and AP Merit school.

Georgia’s 3rd best school district is Jefferson City Schools, a small district of four schools based in Jackson County. JCS schools perform at a high level and have earned numerous awards and recognitions, including a 2018 Highest-Performing Title-I Reward School honor for Jefferson Academy.

Harris County School District earns 4th place among Georgia public school districts. The accredited district consists of seven schools and a performance learning center based in Hamilton. HCSD’s graduation rate of 93% is over 10 points higher than the statewide rate.

Closing out the list of Georgia’s five best school districts is Bremen City Schools, comprising three elementary schools, one middle school, and one high school in Haralson County. All of the district’s schools earned either an “A” or “B” grade from the Governor’s Office of Student Achievement. 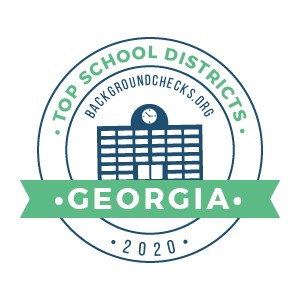