Florida is often considered one of the best states in the nation for higher education, and its public school system is not far behind. While its excellent universities may receive the most national attention, its top public school districts perform at an elite level that places them among the best in the United States.

Wakulla County School District is the top public school system in Florida.  Headquartered in Crawfordville, WCSD consists of four elementary schools, two middle schools, one high school and one charter school. Wakulla students consistently score above state and national averages in assessment tests like the ACT, while the district routinely earns an “A” grade from the Florida Department of Education.

Placing 2nd in Florida is Gilchrist County School District, which is a small district by Florida standards, comprising four schools with a total enrollment of 2700. GCSD boasts a high school graduation rate of 90% and 70% of its students are proficient in math.

Suwannee County School District earns Florida’s #3 spot. Once a troubled district, SCSD is on a continuing path of improvement, recently earning an all-time high score from the Florida Department of Education.

Florida’s 4th best school district is Hendry County District Schools, which is headquartered  in the city of Labell and comprises ten schools and one early learning center. The district’s Clewiston High School recently achieved its highest graduation rate in history.

Rounding out the list of Florida’s top five school districts is Dixie District Schools, headquartered in the small town of Cross City. The rural district consists of two elementary schools, one middle school, and one high school. DDS is recognized as a Florida Healthy School District. 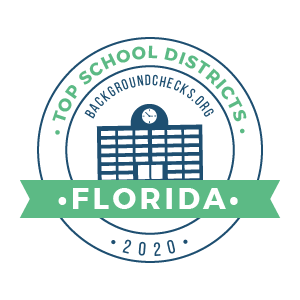