Though public education in Delaware isn’t quite at the level of its neighbors Maryland and New Jersey, the state is nevertheless among the best in the nation. In 2018, the Delaware high school graduation rate hit a record high of 86.69%, besting the 2017 number, which was also an all-time high. Performance at Delaware’s five best school districts bests the already high state standard.

Cape Henlopen School District is the top public school system in Delaware.  Consisting of eight schools located in the scenic southern cape region of Delaware Bay, CHSD boasts a graduation rate of 91% that bests state and national averages, while nearly 66% of its students are proficient in English language arts.

Caesar Rodney School District places a close 2nd in the rankings. Headquartered in Wyoming, Delaware, CRSD and its schools have earned a long list of achievements and academic recognitions, including three Blue Ribbon awards.

Smyrna School District earns the 4th spot in the rankings. SSD’s eight schools all perform above the state level in proficiency tests, and 97% of SSD seniors graduated in 2018. 93% of them went on to a post-secondary education. 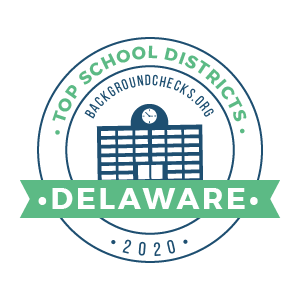