Connecticut’s public school system is one of the best in the nation, with the state’s students earning test scores significantly higher than national averages while graduating at a rate of nearly 88%. While the state performs well overall, the achievements of Connecticut’s five best school districts are even more singularly impressive.

Westport Public Schools is the best school district in Connecticut. The medium-sized district of nine schools in the oceanside community of Westport boasts a graduation rate of 98%, while over 80% of its students score above proficiency level in reading and language arts and math.

The 2nd best school district in Connecticut is Trumbull Public Schools, a system made of 10 schools with a total enrollment nearing 7,000. TPS students enjoy a student-to-teacher ratio of 13.1 and graduate at a rate of 97%.

Connecticut’s 3rd best school system is Darien Public School District, made up of seven schools in the community of Darien. A large majority of students in the district score above proficiency in RLA and math, while Darien High School has earned a “Best High School” medal from U.S. News.

Earning Connecticut’s #4 spot is Glastonbury Public Schools, comprising eight schools in the affluent Hartford suburb of Glastonbury. The district does a great job of preparing students for a post-secondary education, and a remarkable 92.8% of 2019 graduates went on to attend a two or four-year college. 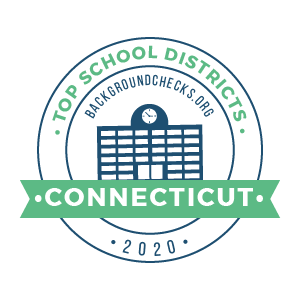