The top public school district in California is Acalanes Union High School District, consisting of four high schools in Contra Costa County. Acalanes’ four schools are all accredited by the Western Association of Schools and Colleges and boast a tradition of exceptional academic performance: each ranks in the top 6 percent of high schools in California on the Academic Performance Index.

Earning the #3 spot is Piedmont Unified School District. The district is made up of seven schools in the city of Piedmont, which is completely surrounded by Oakland. PUSD students achieve some of the highest scores in the state on standardized tests, and over 95 percent of graduates go on to enroll in higher education.

San Marino Unified School District is California’s 5th best school district. A small district compared to others on the list, SMUSD comprises two elementary schools, one middle school, and one high school. The district’s schools have earned numerous honors and recognitions, and all are Blue Ribbon Award winners?. 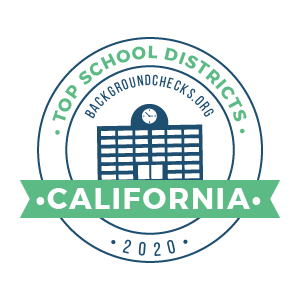