While on a whole, the Arkansas education system may not receive any special distinctions, a handful of its public school districts rank among the finest in the nation. Here’s a closer look at the Natural State’s five best school districts.

Greenbrier Public Schools is the best school district in Arkansas. GPS is a medium-sized district of six schools serving over 3,000 students in the small city of Greenbrier, along with parts of eight other communities in the region. The district’s high school is one of the best in the state and has a graduation rate of over 97 percent.

Earning the #2 spot is Benton School District, comprising seven schools serving the Little Rock suburb of Benton, as well as parts of surrounding communities. Every school in the district is accredited by the Arkansas Department of Education, and BSD recently reported its highest graduation rate in five years.

The 3rd best school district in Arkansas is Greenwood School District, long one of the highest-performing in the state. Students in the district regularly earn ACT scores above state and national averages, as well as scoring among the top five schools in the state in math and literacy on the ACT Aspire exam.

Lakeside School District, which serves the resort community of Hot Springs, completes the list of Arkansas top five school districts. Students at Lakeside’s four schools regularly distinguish themselves through high performance in assessment testing and by earning a high number of scholarships. 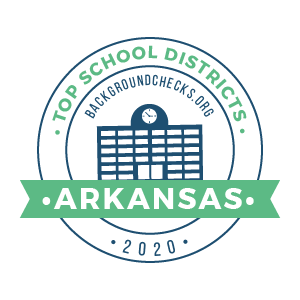