Although Alabama lags behind other states in terms of test score performance, there are a number of public school districts in the Heart of Dixie where this is far from the case. Let’s look at Alabama’s top five best school districts.

Alabama’s best school district is Vestavia Hills Schools, a medium-sized school district of eight schools and an enrollment of around 7,000 students. Not only do Vestavia Hills students excel in academics, but they perform excellently in extracurricular activities, as well, with the Vestavia Hills High School “We the People” team recently bringing home its 16th straight state title in a competition that simulates congressional hearings.

Not far behind is #2 Mountain Brook Schools, made up of four K-6 elementary schools, one junior high, and one high school serving the wealthy city of Mountain Brook. MBS is an all-around excellent district, with high assessment scores, a high graduation rate, and a favorable student-to-teacher ratio. In fact, five of the district’s schools have received the Blue Ribbon Award from the U.S. Department of Education.

Trussville City Schools is Alabama’s 3rd best school district. Composed of five schools serving Trussville, an affluent suburb of Birmingham, TCS is an elite district that performs well on assessment tests and boasts a dropout rate below one percent.

In the 4th spot is the Enterprise City School System, a large district made up of nine schools serving over 7,000 students. ECSS has a great pedigree: it was the first district in Alabama to be accredited by both the State Department of Education and the Southern Association of Colleges and Schools, and around 82% of district students go on to attend 2 or 4-year colleges.

The 5th best school district in Alabama is Alabaster City Schools, which serves over 6,000 students in the Birmingham suburb of Alabaster. Although ALC is a young district established in just 2013, it’s already one of the best-performing in the state, being one of just 26 districts to earn an “A” on the Alabama Education Report Card. 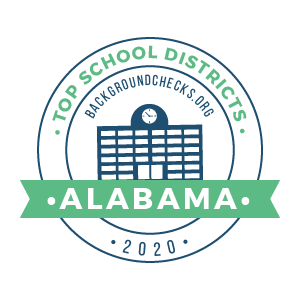