Online dating has gone mainstream. Research shows 40 million Americans use dating apps to find a relationship, according to eHarmony.

The growing popularity of online dating makes it the most popular way for couples to connect. The more traditional ways to meet people, like through family, friends, or at local gathering places like church, have been on the decline since 1940, according to research from Stanford.

Thirty-nine percent of heterosexual American couples met through online dating in 2019, according to Stanford, up from 22% in 2009.

While many people find relationships through today’s tech, it’s not always a pleasant experience. In fact, online dating can be downright dangerous. Not everyone online is looking for love. Some people use the sites to look for victims. Research shows:

As more people turn to online dating platforms, safety concerns will continue to grow. It’s important for every citizen – no matter where they live – to understand the risks of online dating. As a helpful tool, BackgroundChecks.org crunched data, some of which included cybercrime statistics, romantic fraud rates, and violent crime stemming from online interactions, to see which states are more dangerous for online dating. Here’s what we found:

Alaska is the most dangerous state for online dating

People looking for love in Alaska, beware. The Frontier State ranks as the most dangerous state for online dating.

Each state was given a danger score. Alaska’s score is 12x higher than the safest state on the list.

Why is Alaska so dangerous? There are many factors, but Alaska has a high rate of romance fraud. Overall, there were 85 reported cases of romance fraud in 2018, according to the FBI, which correlates to the highest number of victims per capita in the U.S. In addition, Alaskans lost an estimated $1 million to online dating scams.

Vermont is the safest state for online dating

Four thousand miles away from Alaska is the safest state for online dating: Vermont. The state has the lowest danger score, making it the least risky state to meet someone through a dating app.

Why is Vermont so safe? There are a lot of factors, but Vermont has just 25 reported cases of online fraud in 2018, with reported losses just below $130,000. In comparison to Alaska, with 85 cases and losses north of $1 million, Vermont’s online dating scene is quite a bit safer.

Alaska is a daunting place to find an online date, but there are other states that are setting off warning bells too. Nevada and California make the list of perilous states to find a mate online. Here’s a look at the five most dangerous states for online dating:

Online dating in Vermont is the safest, but there are other states where online dating is less likely to result in being scammed, lied to, or physically harmed. West Virginia and Montana also have low danger scores. Here’s a look at the five safest states for online dating:

Online dating dangers: Which states are the most alarming?

The level of online dating danger varies across the U.S. To find out how dangerous your state is, check the heat map below. States in dark red are the most dangerous. States in light red are the safest. 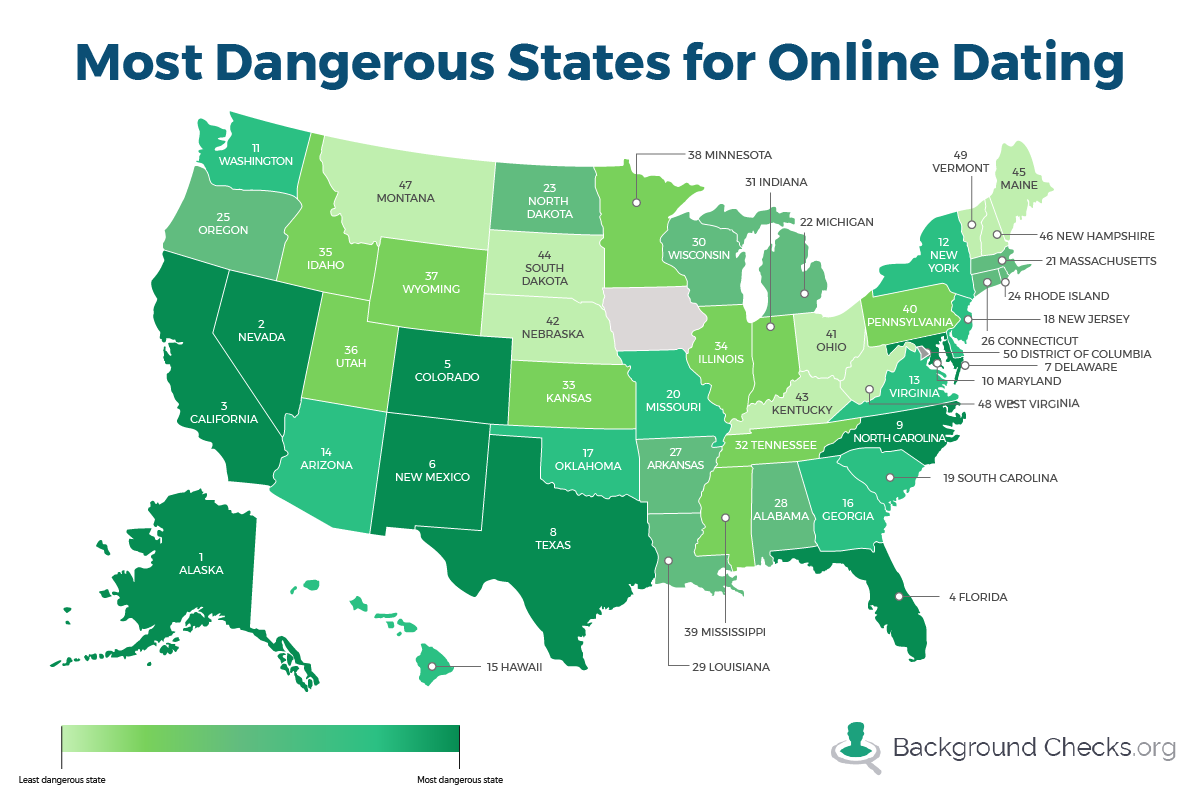 While compiling data to explore the dangers of online dating by state, several trends emerged that are worth noting.

Research shows 19 states have a danger score that’s higher than average. Put simply, online dating is dangerous for 38% of residents across the U.S.

Research shows 30 states have a danger score that’s less than average. With 30 states registering lower scores, it correlates to a safe online world for about 62% of Americans.

Four out five of the safest states for online dating are in the east. Vermont, West Virginia, New Hampshire, and Maine are all on the Eastern side of the states. While the data doesn’t provide an explanation for this, it is interesting to point out.

Whether you live in California or Connecticut, dating apps and dating app development companies are on the rise and expanding. Nevertheless, everyone should take certain precautions when dating online. Here are some safety tips to follow when online dating:

One of the first things dating app users should do is Google the person they’re speaking with. After reading through the posts for anything alarming, run a separate search, “search by image” on Google. If the person’s image is attached to multiple identities, you’re likely dealing with a scammer.

Rather than give out your personal cell number, get a free number from Google Voice. Calls and texts still come through your cell phone, but the number is different. It makes it easier to block calls if needed.

After connecting with someone online, take a look at his or her social accounts. Any account with a low number of friends or a lack of photos including family or friends is likely fake.

Before meeting someone, it’s a good idea to run a background check. It might sound like a little much, but given the amount of criminal activity that’s fostered through online dating sites, it’s a wise move. BackgroundChecks.org offers a free online directory of public records to search.

A first date shouldn’t be a movie night in your home. If you’re ready to meet someone in person, do it in public. A restaurant or coffee shop is a good choice. You shouldn’t give out your address until you’ve established a trusted relationship.

If you arrive at a bar for date and there’s already a drink waiting for you, it’s a red flag. To be on the safe side, order your own drinks and watch them being delivered.

If you go on a date, let a friend know where you are. Plus, create a code word with a friend as an escape plan. For example, if you text your friend, “Having a great time,” it means she should call you immediately with an “emergency” that forces you to leave. This plan works for a variety of dating problems, from a boring date to a scary one.

Some people even turn phone location apps on so friends can track their whereabouts, as an additional safety precaution.

During an initial get-to-know-you phase, you should always drive separately. Getting into a stranger’s car comes with risks, so drive to and from the date in your own car. If you decide to make multiple stops, like from a restaurant to the movie theater, drive separately. Riding together should wait until a relationship is established.

If something feels off – trust it. Some people are so worried about being rude that they ignore their gut feeling that something’s wrong. Safety is more important than good manners.

Online dating has created an entirely new way for people to meet. With a few taps and swipes, dating apps make it possible to spark relationships between people that may never have met otherwise. While the wonders of online dating are great, safety should always remain a priority.

Online dating is more dangerous is certain states than it is in others. Alaska, for example, is a risky state to start an online romance, while Vermont is safest.

Regardless of which state a person lives in, everyone should take a safety-first mentality when it comes to online dating.

We used the following six variables to compute a ‘Danger index of online dating’.  We assigned equal weights to these variables and computed a weighted average score for each state. The higher the danger score, the more dangerous it is. The ranking of the states by the Online Dating Danger score is shown below. (Iowa and the District of Columbia were excluded due to missing data.)