Good news for Wyoming residents: the Cowboy state is among the top ten safest in the country based on its low violent and property crime rates. This is reflected in the performance of Wyoming’s cities on our Safety Index, which utilizes FBI crime statistics and law enforcement employee data to calculate the safety of a community.

Just 2 of Wyoming’s 10 cities with a population over 10K received negative Safety Index scores (Cheyenne and Rock Springs), indicating higher than average crime rates, meaning that the other 8 performed very favorably. Of the 8 Wyoming cities to earn a positive Safety Index score, 4 truly distinguished themselves, earning a 0.5 or higher. Let’s take a closer look at Wyoming’s 4 safest cities.

Our pick for the safest city in Wyoming is Sheridan, a community in the northern part of the state located halfway between Yellowstone Park and Mount Rushmore that is known for its strong rodeo and cowboy culture. The city logged just 8 violent crimes in 2017, which amounts to a very low 0.44 per 1,000 violent crime rate, less than a quarter of Wyoming’s already low state average.

Placing #2 in the list of ranking of Wyoming’s safest cities is Green River, of the wonderfully named Sweetwater County. The mining and energy hub recorded a terrific 1.63 per 1,000 violent crime rate along with a property crime rate below 10 per 1,000. At #3 Jackson, county seat of Teton County and gateway to the Grand Teton National Park, fared nearly as well, posting violent and property crime rates below the national averages in both categories.

Laramie is the 4th of our 4 Wyoming cities to achieve that lofty goal of a 0.5 Safety Index score or higher.  The city of over 32K recorded just 30 violent crimes in 2017, for a violent crime rate of less than 1 incident per 1,000 residents. 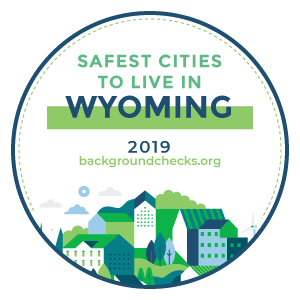