West Virginia fares pretty well among the states in crime, posting the 15th lowest property crime rate and 23rd lowest violent crime rate, both of which are below the U.S. national average. However, this tendency towards low crime is not well reflected in West Virginia’s larger cities within our population parameter of 10,000 or higher, indicating that the state’s small communities are much safer, on average. Of West Virginia’s 13 larger cities, 8 earned negative scores on our Safety Index, indicating higher-than-average crime rates, while 5 garnered positive scores. Let’s take a look at these 5 West Virginia cities.

West Virginia’s #3 safest city is Morgantown, the county seat of Monongalia County picturesquely located on the Monongahela River. The home of West Virginia University recorded a respectable 2.65 per 1,000 violent crime rate and 15.38 per 1,000 property crime rate, which are below state averages.

There’s a bit of a drop off between West Virginia’s three safest cities and those below them in the ranking. Yet, #4 Fairmont’s violent and property crime rates, while not spectacular, are still an improvement on the national average in each category. Despite its higher than average property crime, #5 Vienna logged a not too shabby 2.11 per 1,000 violent crime rate. 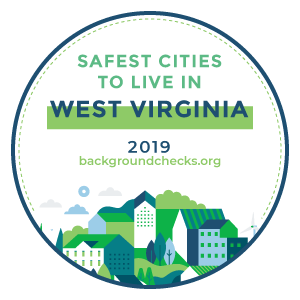