Like its neighbor Oregon, Washington has lower than average violent crime, yet high levels of property crime. In the state’s larger cities such as Seattle and Spokane, you’re more likely to have your car broken into than become the victim of an assault. Still, despite Washington’s property crime issue, there are plenty of communities in the state with an all-around high level of safety. Let’s take a look at Washington’s five safest cities.

The safest city in Washington is Snoqualmie, a compact suburb of Seattle well known to fans as the setting for many exterior shots of the cult television show, Twin Peaks. Recording just two violent crimes in 2017, Snoqualmie logged a very low 0.15 violent crimes per 1,000 residents, along with a property crime rate half of the U.S. national average.

Second place goes to Enumclaw, a King County city whose name derives from a Native American legend about two brothers that became thunder and lightning, boasts an excellent violent crime rate -- just 0.85 per 1,000 residents -- along with a property crime rate lower than state and national averages.

There’s not much of a drop-off between #2 Enumclaw and #3 West Richland. In fact, the latter city actually has lower overall crime rates, factoring in its very low property crime rate of 11.71 per 1K, and falls to the #3 spot on account of a lower ratio of law enforcement personnel to residents.

Fourth in the ranking is Sunnyside, a small city in eastern Yakima county. Sunnyside did not muster the low crime rates of Washington’s top three safest cities, but its violent and property crime rates are both below the national average.

Closing out the top five is Oak Harbor, a city on Whidbey Island whose crime rates are quite a bit lower than #4 Sunnyside’s, but logged a lower law enforcement to resident ratio that worsens its overall safety rating. 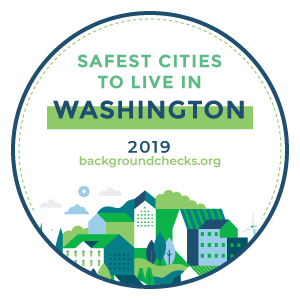