Good news for Virginians: the state is among the safest in the nation, logging the 11th lowest property crime rate and 4th lowest violent crime rate. Furthermore, “Old Dominion” is without a doubt the safest southern state, as much of the region is marred by high crime rates. In a state full of safe communities, a handful truly distinguish themselves with their elite safety records. Let’s take a closer look at them.

Virginia’s safest community is Vienna, a town of 16.5K in Fairfax County that frequently gets touted as one of the best places in the country to live due to its excellent public schools, the strong job market of the surrounding area, and last but not least, its very low crime. Vienna posted terrifically low crime rates for 2017: a violent crime rate of 0.24 per 1,000 and property crime rate of 7.96 per 1,000, meaning that’s title as the state’s safest is well deserved.

Following just behind Vienna are #2 Salem and #3 Falls Church, which scored a 0.75 and 0.74, respectively, on our Safety Index. Both boast a violent crime rate of about 0.7 per 1,000 (less than a fifth of the national average), though Salem’s property crime rate is a notch lower.

Three other Virginia cities belong in the upper echelon of safe US cities based on their high safety scores: Fairfax City, Herndon, and Manassas Park.  Each are smaller cities with populations under 25,000 that recorded violent crime rates less than half of the national average, as well as correspondingly low property crime rates. 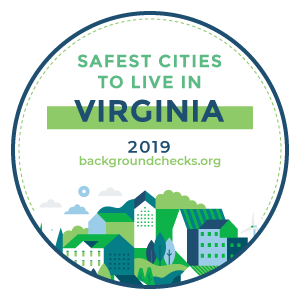