Owing to its size and the diversity of its communities, Texas is actually home to a large selection of very safe cities boasting low violent and property crime rates. Let’s take a look at some of the Lone Star State’s safest communities.

Mansfield, Texas #2 safest city, is part of the Dallas-Fort Worth Area. The fast-growing city of 67K logged a violent crime rate less than a third of the Texas state average of 4.39 per 1,000, as well as a property crime rate half of the state average. Logging similarly low crime numbers is #3 Roma, a small border city along the Rio Grande in Starr County.

Ranking #4 in the list of Texas’ safest cities is Seabrook, a pleasant community located on Galveston Bay with a waterfront known for its cozy bed and breakfasts and antique shops. Seabrook’s low violent and property crime rates are well under half of Texas state averages, which should provide comfort for residents and visitors alike.

Rounding out Texas’ top five safest cities is Midlothian, a fast-growing suburb of Dallas known as a steel and cement industry hub that boasts a violent crime rate below 1 incident per 1,000 residents. 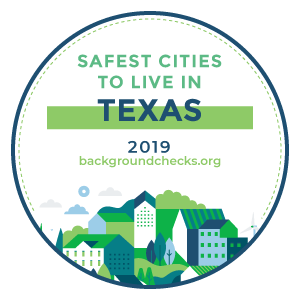