Looking at Tennessee’s statewide crime statistics, it’s easy to come to the conclusion that it’s not a safe place to be. The state has the 3rd highest violent crime rate and the 9th highest property crime rate in the nation. However, these figures don’t tell the whole story, as Tennessee’s poor showing is mostly to do with very high crime rates in large cities like Memphis, Nashville and Chattanooga that skew the numbers.

In fact, plenty of Tennessee cities boast exemplary safety records, with low crime rates and well-staffed police forces. In all, 13 cities in the state earned a Safety Index score of 0.2 or higher. The Safety Index is our way of determining the safety of a given community based on FBI crime data, population, and law enforcement employee numbers, and a score above 0.2 indicates that a city is very safe. However, four Tennessee cities truly distinguished themselves with SI scores topping 0.4, placing them among the nation’s elite in terms of safety.

Germantown is our pick for Tennessee’s safest city. The affluent Memphis suburb garnered a Safety Index score of 0.84, which is remarkable for a city its size. Germantown’s high SI score is based on its very low 0.79 per 1,000 violent crime rate, which is less than six times lower than the state average, in addition to its similarly low rate of property crime.

?On second place, Collierville can’t quite match Germantown’s safety record, but does quite well in its own right. The community of nearly 50K logged a violent crime less than three times lower than the state average, along with an impressive 18.3 per 1,000 property crime rate, rendering it a safe choice for families settling in the Memphis metropolitan area.

Third place, Brentwood and fourth place, Collegedale are two more Tennessee cities to distinguish themselves via crime rates well below state and national averages. Both logged violent crime rates below 1 incident per 1,000 residents, a mere fraction of Tennessee’s 6.52 per 1,000 state average. 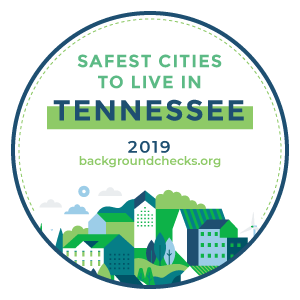