Brandon is South Dakota’s safest city. The quaint Sioux Falls suburb recorded a scant 26 property crimes in 2017, calculating into an extremely low 2.57 per 1,000 rate of property crime, which is lower than the national violent crime rate. Even more impressive is Brandon’s violent crime situation: none were reported in 2017, the latest year for which complete statistics are available. If there’s anywhere in South Dakota where you can be completely assured of the safety of you and your loved ones, it’s Brandon.

Ranking #2 in South Dakota is Brookings, which, with a population of 24,198, is the 4th largest city in the state. The city’s violent crime rate of 1.49 per 1,000 is around a third of South Dakota’s state average, while its property crime rate is also below the state average. This is all the more impressive considering that Brookings is home to South Dakota State University, the state’s largest higher learning institute.

Huron, named after the Huron Native American tribe, is the last of the three South Dakota cities deemed to be very safe. The city earned a 0.14 Safety Index score based on the strength of its  violent and property crime rates below state average. 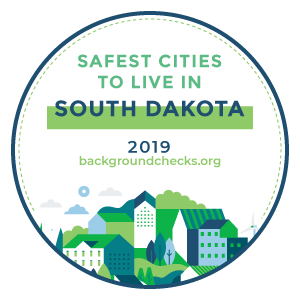