With the 9th lowest violent and property crime rates in the nation, Rhode Island can definitely lay claim to being one of the safest states to live in. Of all of the state’s cities, just 4 (Central Falls, Pawtucket, Woonsocket, and Providence) recorded violent crime rates above the national average. The rest enjoy low rates of both violent and property crime, though 7 cities truly distinguished themselves through earning a Safety Index score above 0.7, putting them in the upper echelon of safe cities in the United States.

Narragansett is Rhode Island’s safest community. The coastal resort town, whose population is known to double in size during the summer months, recorded a violent crime rate of just 0.64 per 1,000, Furthermore, Narragansett logged a property crime rate of 6.94 per 1,000, which is unusually low for a resort community. Following closely behind is #2 East Greenwich, the wealthiest municipality in Rhode Island, which boasts a violent crime rate even lower than Narragansett. 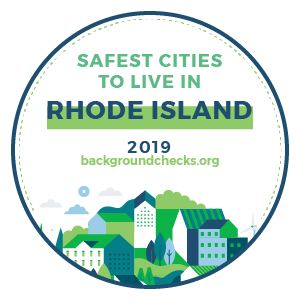