Oregon is an outlier among U.S. states due its starkly contrasting rates of violent and property crime. Its violent crime rate of 2.82 per 1,000 is good for 15th lowest in the nation, yet its property crime rate is 7th highest in the U.S.

Regardless, a handful of Oregon cities are very safe and family friendly communities, with 8 of them scoring above a 0.2 on our Safety Index, which factors in FBI crime data along with law enforcement employment numbers to rate the safety of a given community. A score of 0.2 or higher indicates a very favorable level of public safety and crime rates below national averages. However, four Oregon cities truly distinguished themselves with Safety Index scores higher than 0.3. Let’s take a closer look at them.

Lake Oswego is Oregon’s second safest city. The affluent Clackamas County community recorded very impressive crime rates well below state and national averages, making it one of the best places in the state to live. In particular, Lake Oswego’s violent crime rate of 0.38 per 1,000 (about a tenth of the national average) stands out as an admirable achievement.

La Grande, a city of around 13K in the northeast part of the state, ranks #3 on the list, earning a Safety Index score of 0.36 based on the strength of its low rate of violent crime. #4 Sherwood bests La Grande in both violent and property crimes, which are some of the lowest in the state. Sherwood is kept out a higher position in the ranking due to its low ratio of law enforcement employees to residents, although with such a low rate of crime, perhaps a large police force is unnecessary. 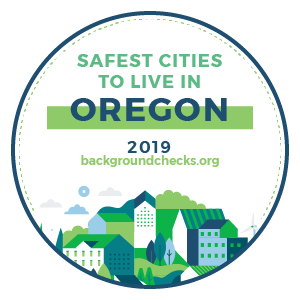