While North Dakota’s population has grown by a considerable 12.77% since 2010, it’s managed to do so without a spike in crime rates: the state is a respectable 21st in property crime and 14th in violent crime.

Let’s take a look at the four North Dakota cities (with a population greater than or equal to 10,000) that earned favorable scores on our Safety Index, which factors in FBI crime statistics and law enforcement employee numbers to judge the safety of a community.

Dickinson and West Fargo share the title of North Dakota’s safest city, with each earning a Safety Index score of 0.33. Both logged violent and property crime rates below state and national averages, although West Fargo’s violent crime rate of 1.45 per 1,000 and property crime rate of 13.49 per 1,000 best Dickinson in both categories. Dickinson makes up for it by posting a higher law enforcement employees to resident ratio.

Trailing slightly behind is North Dakota’s #3 safest city, Minot, of Ward County. The city of over 50,000 recorded a violent crime rate of 2.67 per 1,000, which is considerably below the national average. 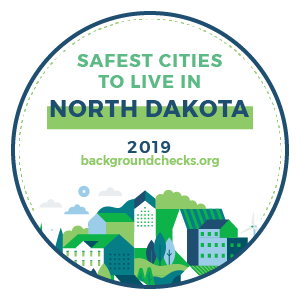