Although it’s around the middle of the pack of U.S. states in terms of overall crime rates, North Carolina is home to a large number of very safe communities. We gave each North Carolina city (with a population above 10,000) a score on our Safety Index, which combines FBI crime statistics and law enforcement employment numbers to calculate the safety of a given city, and 24 cities in the state earned a 0.24 or above, indicating a high level of public safety well above the U.S. average.

Of these 24 North Carolina cities, 6 achieved a 0.5 Safety Index score or above, placing them in the upper echelon of safe cities in the country. Let’s take a closer look at these cities to see what makes them so safe.

Pinehurst, a village in Moore County, is North Carolina’s safest community. Renowned as home to Pinehurst Resort, a historic golf resort designed by Frederick Law Olmsted, the pioneer of American landscape architecture, Pinehurst earned a 0.6 Safety Index score on the strength of a very low property crime rate that is less than half of the U.S. average.

In terms of safety, #2 Archdale is not far behind. The cozy city of 11.6K 15 miles outside of Greensboro is home to wine vineyards as well as the John Deere Vintage Tractor Museum, which should be on visitor’s short list of North Carolina tourist destinations.

Sharing the #3 spot are Holly Springs and Mount Airy, two North Carolina cities that earned a 0.54 Safety Index Score, owing to low crime rates and favorable ratios of police officers to residents. Holly Springs, in particular, has received acclaim as a great town to live in, on account of its great public school system and many public parks. Currently boasting a population of around 35,000, Holly Springs has more than tripled its population since the year 2000.

With it’s 0.51 Safety Index score, Elon, a town in Alamance County best known as home to Elon University, just edges out Apex (Safety Index score: 0.5) for North Carolina’s #5 spot. However, both are great family-friendly communities to settle down in. 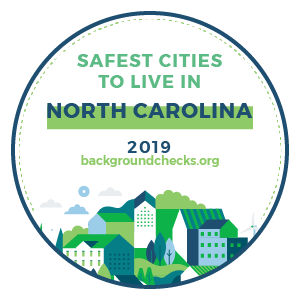