Overall, New York fares very well in terms of safety compared to the rest of the nation: its violent crime rate is 24th lowest in the country, but the state is just 5th in property crime. New York’s individual cities fare very well on our Safety Index, which is a combination of FBI crime statistics and law enforcement employee to resident ratio used to measure the safety of a given community. While an impressive 61 New York cities score a 0.3 or higher on the Safety Index, indicating a very high level of safety, let’s place our focus on the state’s top five safest cities.

Not far behind is #2 Port Washington, another wealthy Long Island community known for its myriad parks, marinas and golf courses. The well-to-do community of 19K recorded a scant 5 violent crimes in 2017 for a rate of violent crime over 14 times lower than the national average. 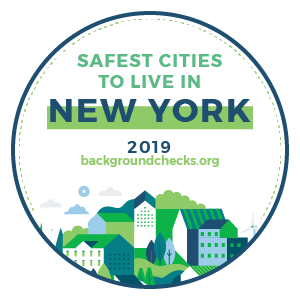