Unfortunately, New Mexico is not one of the safest states in the nation, recording the highest rate of property crime and 2nd highest rate of violent crime. However, some individual communities achieved decent scores on our Safety Index, which rates the safety of a city based on FBI crime statistics and law enforcement data, proving that there solid, safe options in the state in which to raise a family.

New Mexico’s safest city is Los Alamos, earning a very high 0.98 Safety Index score that dwarfs those of every other community in the state. The small city, which is famous for its proximity to the Los Alamos National Lab where the atomic bomb was created, recorded a 1.65 per 1,000 inhabitants rate of violent crime, which is nearly five times lower than the state average, as well as a property crime rate seven times below the state average.

It’s a steep drop off to New Mexico’s #2 safest city, Portales, which logged a -0.02 Safety Index score. Yet, despite the city’s high level of property crime, Portales achieved a decent 2.01 per 1,000 violent crime rate that is a third of New Mexico’s state average.

Rounding out New Mexico’s top five safest cities is Las Vegas (not that one), recording a 7.52 per 1,000 violent crime rate which is near New Mexico’s state average. 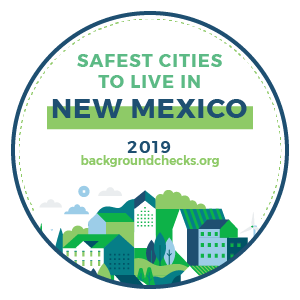