The Garden State boasts an excellent safety record, recording the 6th lowest property crime rate along with the 8th lowest violent crime rate in the United States. Unsurprisingly, dozens of individual New Jersey cities fared very well on our Safety Index, which factors in FBI crime statistics and law enforcement data to determine the safety of a given community.

Ocean City is our pick for New Jersey’s safest city, scoring a sky high 1.35 on our Safety Index. The seaside resort community recorded just 12 violent crimes in 2017 for a low 1.13 per 1,000 inhabitants.

Weehawken Township also performed very well on the Safety Index, logging a 1.09 Safety index score on the strength of a violent crime rate under 1 per 1,000 inhabitants.

Not far behind is #3 Ventnor City. The city of just over 10K recorded an impressively low 0.58 violent crimes per 1,000 inhabitants, although its property crime rate is above the national average.

Ranking 4th is Wall Township, a steadily growing community in Monmouth County known for its coastline and many public parks. Wall Township recorded a 0.73 per 1,000 violent crime rate and an equally impressive 9.79 per 1,000 property crime rate. 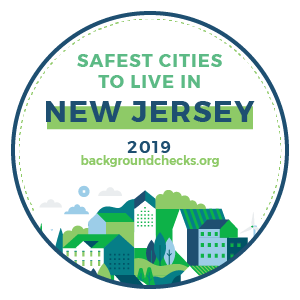