Although it’s mainly known as the home of Las Vegas, the prime destination for folks around the country to fly into for a weekend and indulge in gambling and other vices, Nevada has a handful of other cities with a safe, family-friendly character far removed from the glitz and rambunctiousness of the Vegas Strip.

In order to determine the Silver State’s safest cities, we analyzed the crime rates and police forces of each of Nevada’s eight cities with a population over 10,000, giving each a score in our Safety Index. Of the eight cities, three scored very well, two had average ratings, and three fared poorly. Let’s see how Nevada’s cities stack up.

First, let’s talk about the cities that scored the highest on the Safety Index, indicating a high level of safety. Nevada’s clear leader in terms of safety is Boulder City, which scored an impressive 0.83 on our Safety Index. The city of 15K about 26 miles south of Las Vegas recorded an excellent 0.57 per 1,000 violent crime rate, along with a property crime rate less than half of the national average. The fact that Boulder City is just one of two Nevada cities where gambling is prohibited may have something to do with its low crime levels.

Along with Boulder City, two other cities also enjoy low levels of crime: Mesquite, a quiet resort community along the Arizona state line, and Henderson, a large city which borders Las Vegas and is home to many casinos, as well. Both cities logged violent crimes rate below 2 per 1,000 and property crime rates below 10 per 1,000, indicating that they are reasonably safe.

Las Vegas and Elko, a city of around 20K in the northwest part of the state, belong in the middle of the pack in terms of safety. Las Vega’s 6.18 per 1,000 violent crime rate is above average, but not unusually high for a city its size.

Now, let’s talk about the cities with scores on the bottom rung of the Safety Index: Sparks, Reno and North Las Vegas. Each earned a middling Safety Index score of -0.5 or lower due to average-to-poor violent crime rates and property crime rates above the national average. 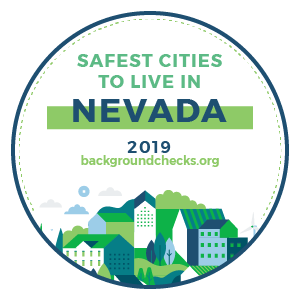