In terms of safety, Montana ranks around the middle of the pack among U.S. states: 31st in property crime and 29th in violent crime. Many of Montana’s smaller communities (population < 10,000) have rather low crime rates, though in computing our Safety Index scores, we eliminated cities below 10K in population from consideration, leaving the six larger Montana communities, which did not perform as well.

Kalispell and Bozeman share the honor of Montana’s safest city (within the population parameters), each earning a -0.17 Safety Index score. Of the two cities, the larger city of Bozeman looks more impressive on paper, with a 2.78 per 1,000 violent crime rate that is below state and national averages in the category.

Great Falls ranks #3 in safety among Montana’s cities. The county seat of Cascade County recorded violent and property crime rates above Montana state averages in both categories, yet still compares favorably to other Montana cities.

Missoula, home of the University of Montana, trails behind at #4, followed by state capital Helena at #5. Both cities recorded violent crime rates above 4.8 per 1,000 as well as correspondingly high property crime rates. 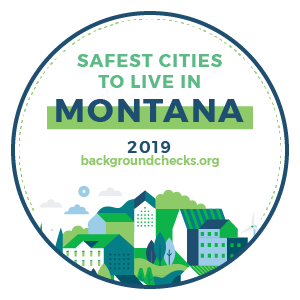